Delve Deeper: Understanding the Neuroscience behind Disaster Recovery (Part 1 of 3)

Part 1- Neuroimaging in the Quake of a Disaster 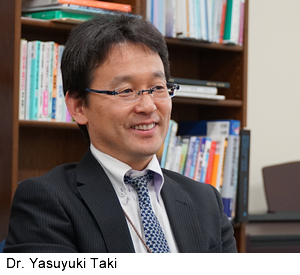 Dr. Taki: I was in a meeting with other researchers (including my wife) in the 2nd floor of this building (IDAC "Smart Aging" Building). This building was built three to four days before 3/11; it was brand new, more resistant to seismic activity, and there was nothing in the meeting room, so we did not really see/feel the earthquake. It was only when we went outside and saw the cracks in the ground that we realized just how big the earthquake had been. 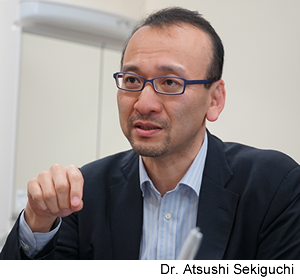 Dr. Sekiguchi: I was in the USA, participating in a clinical conference in San Antonio. My wife and I had been talking via Skype when the earthquake started, and I saw the shaking the earthquake caused on the computer. It was a scary situation, especially when our Skype connection died. I didn't know if she or my son were ok until the next morning when I heard from my mother who lives outside of the Tohoku area. When I returned to Japan a few days later, I flew into Sakata (in Yamagata Prefecture), my wife's hometown, and was reunited with my family there.

Question 2: What are the major issues that your research group faced after the disaster? How has your lab recovered since then?

Dr. Taki: At the time of the disaster, we both belonged to another lab. This lab was fortunate in that data was not lost, and electricity returned to the lab a few days after the disaster. The major issue that we experienced in our specialty of brain and neuroimaging was the breakdown of our one MRI (magnetic resonance imaging) machine after the earthquake. We could not continue our research until the machine was fixed one and a half months later. While it was frustrating at the time, this research delay was slightly beneficial because if provided us time to focus on writing and revising papers to submit for journal review.

Question 3: Please discuss the MRI projects that are being organized by ToMMo. What trends have your analyzed results shown?

Dr. Taki: ToMMo has organized a cognitive and psychological data and MRI data analysis of people of the Tohoku region, including those affected by the disaster. We started collecting data last summer and as of right now we have data from 1,000 people; our goal is 10,000 participants, and we are making progress to approach that number within the next several years. 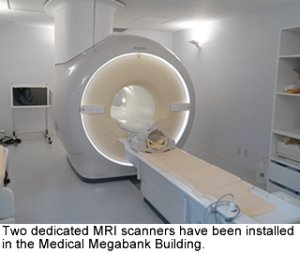 In addition to brain MRI and cognitive psychological data, questionnaires and genetic factors are being evaluated to assess brain changes in states of Posttraumatic Stress Disorder/ Reaction (PTSD/PTSR) and risk for dementia as a result of traumatic psychological distress.
Additionally, we hope that this study will better our understanding of the relationship between PTSD/PTSR and depression, and the impact of such disorders on the progression of dementia via MRI analysis. MRI is a good and objective biomarker to detect tiny changes in brain structure, function, perfusion, and bio matter microstructure. Phenotype, of course, is important for PTSD, depression, dementia, but the "end phenotype" is also necessary for in depth analysis of the brain because before cognitive decline occurs, brain structure changes. (End phenotype is just the brain MRI.) The brain MRI can detect the symptom of dementia, for example, via structural changes five years before the cognitive degradation occurs, and thus we can actually predict the brain's future state using MRI.
There are labs doing similar work now, but until recently, very few big projects combining epidemiology cohort study and MRI existed. Some others, like the Dutch Rotterdam Study and the UK Biobank, just started to include the brain MRI as a biomarker, but we are pioneering it with our advanced approach.

Dr. Sekiguchi: Currently, our data demonstrates that few participants have developed PTSD, but do show subclinical levels of distress which have been detected with MRI in combination with cognitive and psychological information. This again demonstrates the advantage of utilizing the end phenotype in our analysis.

Go to next part.