・ We have developed a novel disease-oriented SNP Array “Japonica ArrayTM NEO” equipped with variants unique to the Japanese population including disease-related SNPs and intended for the application in clinical use such as medical examinations.

・ SNP information obtained by Japonica ArrayTM NEO can be restored to more than 10 million of variant information using genotype imputation.

・ By the combination with genotype imputation, Japonica ArrayTM NEO makes it possible to obtain variant information comparable to whole genome sequencing at low cost, high speed, and high accuracy, which enables genome analysis for a much larger number of people. 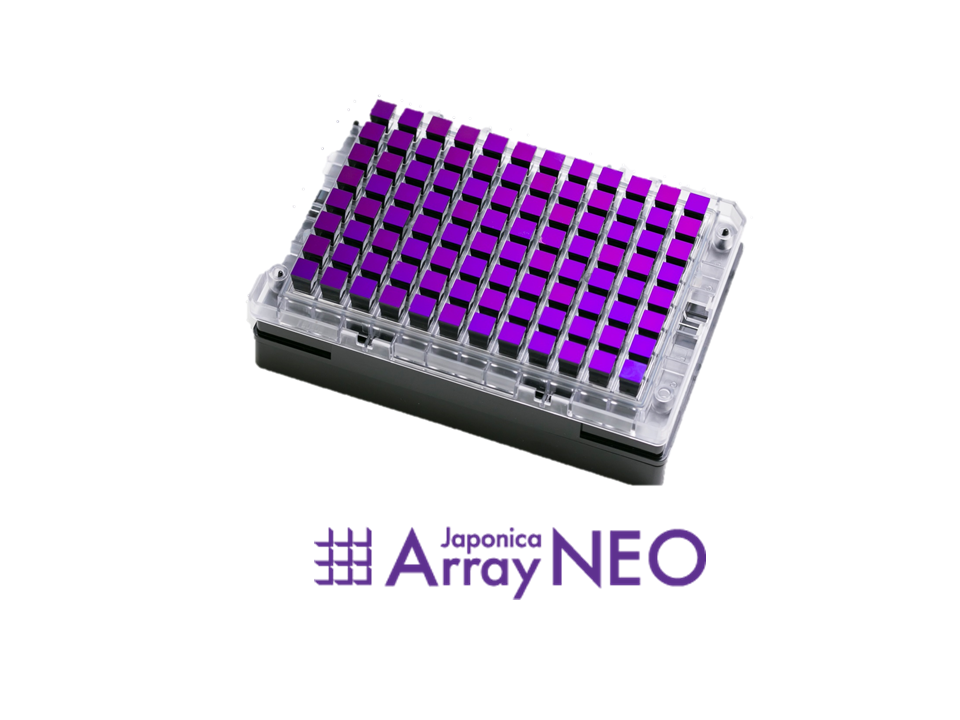 Japonica ArrayTM, a tool for genomic analysis that enables us to obtain genome-wide information of Japanese individuals at low-cost and high accuracy, has been developed in the Tohoku University Tohoku Medical Megabank Organization (ToMMo).
ToMMo designed a novel SNP array equipped with SNPs unique to the Japanese population including disease-related SNPs and the Thermo Fisher Scientific Japan Group has begun sale of the product as “Japonica ArrayTM NEO.”
Japonica ArrayTM NEO includes more than 28,000 disease-related SNPs unique to Japanese individuals based on publications and detabases, and is expected to be widely used in association studies of disease risks. In addition, tagSNPs are designed based on the Japanese whole-genome reference panel, 3.5KJPNv2, and therefore, Japonica ArrayTM NEO is the best tool for genome analysis of Japanese population.
Combined tagSNP information obtained by Japonica ArrayTM NEO with genotype imputation, it is possible to reconstruct variant information that is comparable to the one acquired by whole-genome sequence analysis. To obtain variant information at the level of whole-genome sequencing, which has been difficult to perform on large-scale populations due to its cost, now becomes a realistic option by virtue of Japonica ArrayTM NEO, and is expected to contribute to future research that aims to realize personalized medicine.

ToMMo was the first in the world to perform a whole-genome analysis of a specific ethnic group on a scale of more than 1,000 individuals, and has published the results as a whole genome reference panel. This panel was utilized to design a microarray, and the Japonica ArrayTM (2014) and the Japonica ArrayTM v2 (2017) were developed by selecting SNPs that are optimized for the Japanese population to achieve high-performance genome analysis at a low cost.
This time, we improved the method to design Japonica ArrayTM; tagSNP was selected based on the linkage disequilibrium statistics (r2), which is increasingly becoming the global standard. The design was based on 3.5KJPNv2, the largest whole-genome reference panel of Japanese individuals (3,552 people) ever developed.

・Number of SNPs on the array
Approximately 650,000 tagSNPs of autosomes and X chromosomes, as optimized for genotype imputation for the Japanese population, were selected using linkage disequilibrium statistics (r2) based on the information of 3.5KJPNv2, and were then loaded into the array.
On the other hand, the disease-related SNPs were selected based on published GWAS results by specialists and from other databases (GWAS Catalog) or commercially available with SNP arrays (UK Biobank Axiom Array), and then filtered by 3.5KJPNv2 to select approximately 28,000 SNPs present in Japanese population. In total, approximately 660,000 SNPs including tagSNPs and disease-related SNPs (some of them are overlapped in both groups) are installed on the array.

・Detailed information on performance
The performance of Japonica ArrayTM NEO was verified by genotyping using samples derived from 286 Japanese individuals. As a results, 99.5% of the SNPs showed polymorphisms, demonstrating that the array was capable of efficiently detecting SNPs in Japanese. Moreover, by the genotype imputation using 3.5KJPNv2, the average value of the determination coefficient between the estimated SNP and that of input was 0.9 or more in nearly all minor allele frequency categories, demonstrating sufficient prediction accuracy. Moreover, the total number of imputed SNPs with a certain accuracy (INFO>0.8) or higher was approximately 13 million in total, which suggests that the design is useful for genome-wide genotyping of Japanese population.

Despite the recent reducing costs for whole-genome sequence analysis, it is not easy to implement such analyses in fields beyond research. However, with the launch of Japonica ArrayTM NEO, the price hurdle has fallen for acquiring variant information on a genome-wide scale, and it may now be possible to identify the link between disease and a wider range of genomic information.
Japonica ArrayTM NEO makes it possible to perform genome analysis at low cost for a large number of individuals, and it is expected to expand into new areas such as medical examinations, which have not yet been targeted for genome analysis.
The differences in genomes among ethnic groups has been clarified, and we believe that Japonica ArrayTM NEO, which is more optimized for the Japanese population than conventional systems, will greatly contribute to the establishment of precision medicine and personalized healthcare in Japan.