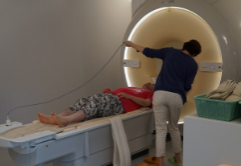 ToMMo has been collecting magnetic resonance imaging (MRI) data from around 12,000 participants. This is a part of the Tohoku Medical Megabank Project Community-Based Cohort Study, and Birth and Three-Generation Cohort Study. We are investigating how genetic factors and environmental factors, such as daily habits, have an influence on the brain, its cognitive functions, and psychological conditions. In doing so, we aim to learn how to maintain a healthy brain and good cognitive functions throughout one’s whole lifetime.

To date, we have:
- Established a large-scale database of anonymous brain images
- Incorporated the data of MR images as biomarkers of cognitive functions and vital functions into cohort studies.

Since October 2019, we have been collecting the second MRI data from the same participants. Looking at this data alongside the genomic information and other data provided from the cohort studies, ToMMo is able to gain a comprehensive understanding of how different individuals are affected by disease. This is ultimately a rich and valuable resource towards research, that can directly contribute towards early detection and prevention of diseases.

Purpose:
Through analyzing the MR images (brain) of participants, combined with analyses of their lifestyles, cognitive function, mental health status, and genome information, we are studying the effects that genetic and environmental factors have on the brain and cognitive function. Simultaneously, this allows us to also study the mechanisms of developing posttraumatic stress reaction (PTSR), depression, and dementia.
This project allowed the establishment of a large-scale database of anonymous brain images. Using this database, we aim to establish methods for early detection and prevention of several psychiatric and neurodegenerative diseases highly associated with brain structure and function changes, such as depression, PTSR, and dementia.

Exam details:
-MRI exam for mainly brain (we also have some thigh data3D imaging of the thigh obtained also)
-Neuropsychological test and questionnaire on psychological state
-Assessment of psychiatric symptoms

MRI scanners:
We scan the brain of participants with a variety of imaging protocols by using two dedicated 3.0-Tesla MRI machines.

This combination of images allows us to assess the brain structure through quantitative morphometrics, including volume and thickness of the neocortex and volume of sub-cortical structures, as well as qualitative appreciation of white matter lesions in an aging brain, and brain vasculature.

We have also acquired body and thighs MR images using a multi-Dixon sequences from around 4,000 participants*. Using these body MR images, we assess body structure, such as the femoral muscle physical volume. The reduction of the femoral muscle physical volume may be an early marker of later cognitive decline, and therefore studying this aspect is the first step towards preventing cognitive degradation.
*first phase only

Return of results:
Using the images for research on cognitive and behavioral assessment, we provide the data obtained, such as brain age (attained from the density of each area in the brain and femoral muscle mass), to the participants.
Incidental abnormal findings occur occasionally, including but not limited to brain atrophy, cerebral infarction, brain tumors, etc. In these circumstances, we ensure that the results are returned to participants with recommendation for medical consultation after the review of images by experts.