Part 1- Dentistry in the Aftermath of a Disaster

Dr. Tsuboi: During that time, I was treating out-patients at Sendai Medical Center located in the downtown of Sendai. As the earthquake persisted, apparatuses and cabinets fell, electricity, water and gas supplies shut down, and we had to discontinue treatment. We suggested that the patients return to their homes, but very later I knew, it was not easy because the earthquake was so severe, making travel impossible. Just after the hospital out-patient closed I came back to Tohoku University Graduate School of Dentistry. On my way to the school there did not seem to be the big confusion at the downtown, but surprising the buildings of our school were severely damaged and kept out. And also at the same time the coastal area was attacked by a tsunami triggered by the earthquake.
March in Sendai is very cold. When I finally returned home, I found my family huddled under blankets trying to keep warm. While my family in Sendai was unharmed, my home town Hisanohama ( North coastal area of Iwaki city, Fukushima prefecture) was devastated by the tsunami. People were not allowed to return until May 2011. In the few months following the disaster, I visited these affected coastal areas.
Despite the severity of the Great East Japan Earthquake, I cannot help but feel that we were far more fortunate than others in developing countries facing similar disaster situations. This is something that we all need to remember when reflecting on the disaster.

Question 2: Can you summarize your experience of being involved in the first responder efforts immediately after the disaster? 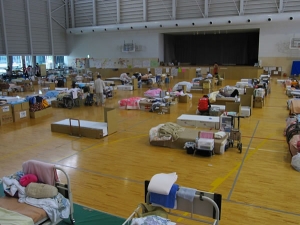 Dr. Tsuboi: I traveled to Ishinomaki, Yamamoto, and other destroyed coastal areas to help in the recovery efforts by setting up temporary dental clinics in the evacuation centers. Unlike Sendai, these cities did not have the enough resources or clinics available to help support the oral health of the survivors. When we arrived on the scene, many people expressed concern about maintenance of oral health and displayed many issues such as cavities, periodontal disease and denture problems. Our dentists had not been appropriately prepared for disaster conditions and we had to recruit other dentists to join our cause, and request for supplies and dental drugs from other facilities.
We started our relief work about a week after the disaster, 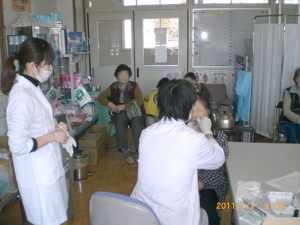 and in the few months we were working in the coastal districts we saw about 1,000 survivors. Most of the survivors we saw were elderly since young people left the evacuation centers early because they had to return to their work or to find employment. Thus, these young individuals as well as their children had the opportunity to visit other dental clinics located in bigger, more established cities. This resulted in most of the issues we treated being related to denture problems including loss of dentures. While working at the temporary dental clinics, I began to recognize the lamentable reality that the destruction might not be completely reversed, especially given that only the elderly remain in these sea-side towns.

Question 3: Many dentists (even young graduate students) aided with postmortem examinations of disaster victims. Please explain how dentistry was used in this circumstance and how dentists dealt with this upsetting, challenging task.

Dr. Tsuboi: This type of work is called Disaster Victim Identification (DVI). Dentists play an important role in DVI because oral examination (e.g. shape of dental arch, number and shape of teeth, cavities and restorations, dentures, matching with X-ray data, and other teeth markers) can help provide the identification of the victim since dental records are unique to each person.
In the first few weeks after the disaster, 80% of all victims were found in the tsunami affected area, and many dentists from the Japanese government, Tohoku University, 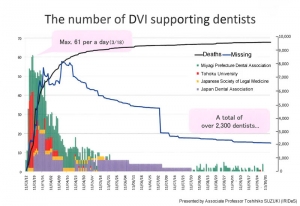 Miyagi Prefecture Dental Association, and the Japanese Society of Forensic Dental Scienceall helped in the DVI efforts. Time is crucial when ascertaining the ID of victims because after a period of time the body starts to decompose. During the initial phase various techniques were used for identification, and then IDs was verified via oral examination. Although I did not personally get involved in these efforts (because I was organizing coastal side dental support), I am aware that this was quite disturbing work. The dentists who participated in DVI saw it as their duty to the people of the Tohoku region and to the families who had lost loved ones, and so they persevered in spite of the hardship.

Go to the next part. 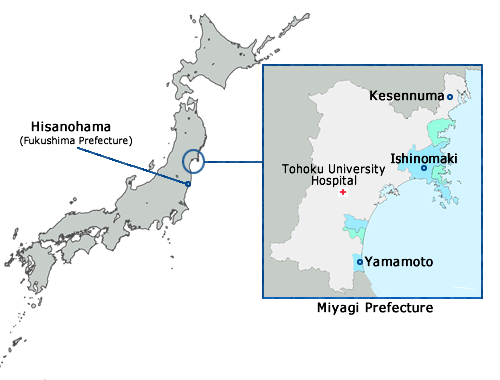