Why Air Pollutants Make Some People Vulnerable to Atopic Dermatitis

Tohoku University Graduate School of Medicine and Tohoku Medical Megabank Organization (ToMMo) are pleased to announce the published results of a study into why air pollutants cause some people to be more susceptible to atopic dermatitis, a kind of skin inflammation.

“We have discovered that AhR, a transcription factor activated by air pollutants, causes hypersensitivity to itch, through the expression of neurotrophic factor artemin,” says Dr. Masayuki Yamamoto, who led the research team with Drs. Takanori Hidaka and Eri Kobayashi. “Scratching makes things worse because the skin barrier gets disrupted and sensitization to antigens is enhanced. That’s why some people are predisposed to atopic dermatitis,”

While the correlation between air pollution and the prevalence and severity of atopic dermatitis is well known, the underlying mechanism behind it was not widely understood, until now.

Itch causes scratching, which disrupts the skin barrier function, making it easy for antigens to penetrate. This results in the patients being sensitized to antigens and predisposed to allergic diseases such as asthma. This is known as “the allergic march,” and is observed in patients with atopic dermatitis.

In human clinical samples, high levels of AhR activation and artemin expression are observed in atopic dermatitis patients but not in healthy individuals. This is also consistent with the findings in a similar study of mice, and further supports the notion that chronic activation of AhR is an important environmental factor causing atopic dermatitis.

Currently, steroid drugs are used as a symptomatic treatment for atopic dermatitis. However, in some cases, the itch remains. The research team believes that control of the itch is important and hopes that with the results of this study, new treatments using inhibitors of AhR and/or artemin can be found. 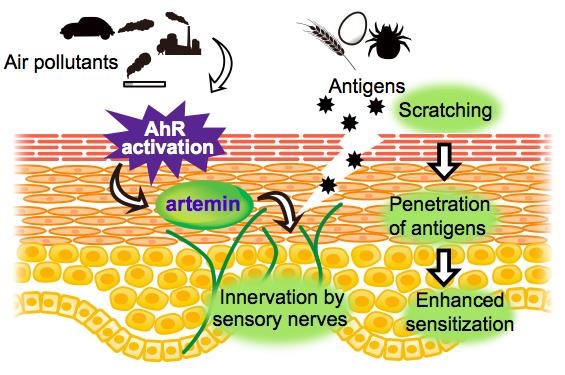 Figure 1
Schema of AhR-mediated development and exacerbation of atopic dermatitis. AhR is activated by air pollutants, such as traffic-derived particulate matter (pm2.5). Activated AhR induces the expression of artemin in keratinocytes, which induces hyper-innervation of the epidermis, resulting in hypersensitivity to itch. Subsequent scratching leads to barrier damage and increased penetration of antigens, which enhances sensitization that promotes a predisposition to other allergic diseases.